Skeletons in the Reacher Family Closet 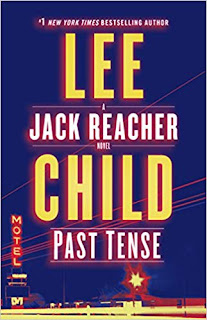 Lee Child learned style from Hemingway. Or maybe from Elmore Leonard or Dashiell Hammett. He writes short, clean, sometimes incomplete but straight-to-the-point sentences. Brief paragraphs, plus almost as short episodic sections consisting of alternating points of view. Except when he writes long action sequences with lots of ands and Reacher did this and that and then his opponents fall down like flies after being sprayed with insecticide. Reacher gets knocked down, too, and instantly he’s back on his feet again. To stay down long means to die.

Hope for the best, plan for the worst.

Although the writing is often sparse and minimalist, it’s also detail-rich. Child pays close attention to tiny details, and so does protagonist Jack Reacher.

Past Tense (Delacorte Press/Random House, November 15, 2018) is Child’s 22nd Reacher thriller.
Patty Sundstrom and Shorty Fleck are a Canadian potato farmer and a timber sawmill worker on their way to NYC to sell something valuable enough to raise sufficient capital to start a new life in Florida. When their old car breaks down in the woods near Laconia, NH, not far from where Reacher’s father Stan was born and raised, they plan to spend only one night. Little do they know they might be trapped there for the rest of their lives.

Jack Reacher, walking and thumbing his way across America, sees a sign for Laconia and decides to visit the town where his father allegedly  grew up. Of course, nothing is ever simple in a Jack Reacher novel. Hope for the best, plan for the worst.

It’s been said that Reacher walks where angels fear to tread. Whenever he encounters a wrong, he feels duty-bound by his own internal code of honor to set it right. Whenever he finds a bully picking on an underdog, he has to step in. He’s a giant of a man, both literally and figuratively. And when he gets mad, all hell can break loose.

Those are traits he inherited from his father.

Faithful readers will find many of the elements they expect in a great Reacher novel in the 400 pages of Past Tense: an intriguing  mystery to solve (several, actually); plenty of broken noses and broken bones; bodies piled up like cordwood (some dead, others merely knocked unconscious); a beautiful female cop who proves not only extremely competent but an excellent foil for Reacher to toy with; plenty of bad guys and a few good guys Reacher needs to protect; a realistic threat to life and limb; and a get-out-of-town deadline. What makes Past Tense different, however, is the number of previously-unknown Reachers that may or may not be closely related to Jack.

Like all the other Lee Child novels, I couldn’t put this book down. The dramatic tension and anticipation of violence kept me devouring words. Learning more about the Reacher family was icing on the cake. Highly recommended.

Lee and me at Thrillerfest. I’m the guy wearing glasses. 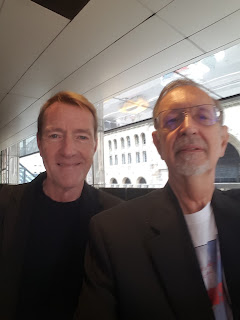 Posted by Paul Dale Anderson at 11:26 PM No comments: